A cookie is information stored on your computer by a website you visit. Cookies often store your settings for a website, such as your preferred language or location. This allows the site to present you with information customized to fit your needs. As per the GDPR law, companies need to get your explicit approval to collect your data. Some of these cookies are ‘strictly necessary’ to provide the basic functions of the website and can not be turned off, while others if present, have the option of being turned off. Learn more about our Privacy and Cookie policies. These can be managed also from our cookie policy page.

IE10 and below are not supported.

What is the Three Waters Reform Programme?
Why is reform needed?
What will a move to multi-regional water entities achieve?
What are the proposed entity boundaries?
Why four entities?
What is the proposed structure of the entities?
What protections will there be against future privatisation of the entities?
How will the public retain consumer and community influence in the way their services are delivered?

What is the Three Waters Reform Programme?

Central Government’s Three Waters Reform Programme sets out to improve the health and wellbeing of all New Zealanders. It will improve the safety, quality, and environmental performance of council-owned drinking water, wastewater and stormwater services (three waters) in a way that is considerably more affordable per household than what is projected without reform.

The reforms are based around three pillars:

Councils are being asked to provide feedback around pillar three - the transition to multi-regional water entities.

Why is reform needed?

Local councils provide three waters services to the majority (85%) of New Zealanders. This includes the infrastructure needed for the collection, storage, treatment, and reticulation of water to homes and businesses. The infrastructure is under extreme pressure and needs systematic reform to meet communities needs and expectations now and into the future. A report by the Water Industry Commission for Scotland (WICS) estimates that New Zealand will need to invest between $120 billion to $185 billion in our three waters infrastructure over the next 30 years to meet drinking water and environmental standards and provide for future population growth.

Without reform, these costs will be shared unevenly among New Zealand households. For rural communities, this equates to an increase of up to 13 times present costs, eight times higher for provincial areas and up to seven times higher for many metropolitan households. With reform, the cost of providing these critical services to our communities is likely to reduce substantially by between 45% to 49%.

Inadequacies in stewardship and management, like those identified in Havelock North where a waterborne gastroenteritis outbreak made 5500 people sick, saw 45 residents hospitalised, and contributed to three fatalities in 2016, reinforces the need for reform of three waters governance.

What will a move to multi-regional water entities achieve?

This reform will bring together three waters services, currently delivered by 67 different councils across New Zealand, into four competency-based water services entities. These entities will remain firmly in public ownership.

Reform is also expected to improve transparency about, and accountability for, the delivery and costs of these services and uphold the Crown’s Treaty of Waitangi obligations to iwi/Māori.

A further benefit of reform, particularly for urban areas, is the improved ability to address contamination of urban streams, lakes and coastal environments through sewer overflows and other unauthorised discharges and stormwater run-off.

What are the proposed entity boundaries?

Cabinet has agreed to a preferred option for the boundaries of the new water services entities. These are shown below.

One entity (currently named Entity D) is proposed to cover the Ngāi Tahu takiwa (all of the South Island excluding Nelson, Marlborough and Tasman). The Mackenzie District would fall under the proposed boundaries of Entity D. 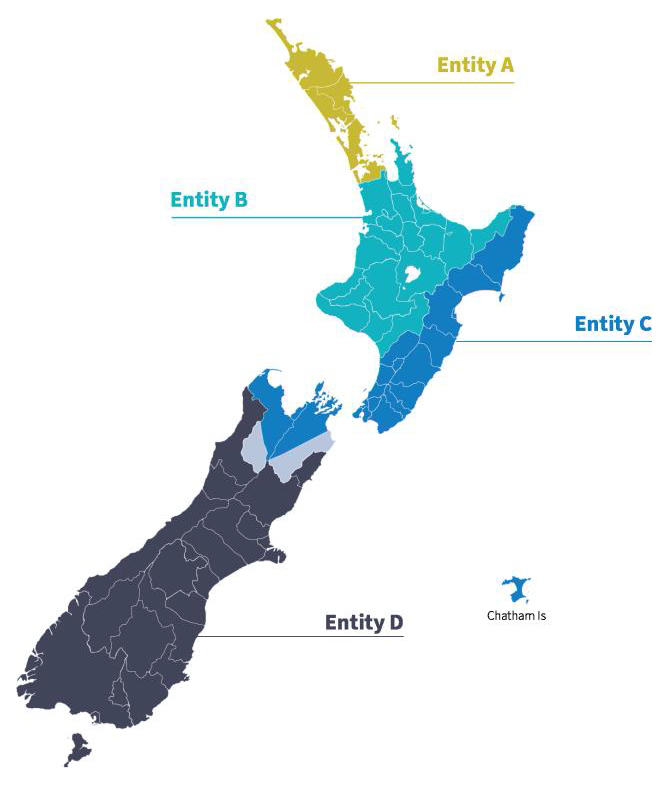 The Government remains interested in continuing discussion with local government and iwi/Māori most affected by the proposed boundaries for feedback before confirming them in legislation.

The Government believes that having four entities strikes the right balance between gaining economic benefits associated with larger entities and catchment considerations and the needs and interests of local communities.

Research shows that by reforming our services to entities that deliver services to at least 600,000 to 800,000 connections, New Zealand can achieve significant efficiency gains. The four-entity model has been selected as balance between scale efficiencies and the ability engage meaningfully with the communities that will own these entities.

The four entities are also expected to also enable better relationships with iwi/Māori, which requires decisions on entity boundaries to be informed by an understanding of rohe/takiwā boundaries and water catchments from source to sea.

What is the proposed structure of the entities?

The four water entities will have the right oversight, governance, management and controls to provide the level of focus and independence required to deliver the objectives of the reforms.

Local authorities will ‘own’ the water entities on behalf of their communities, with mana whenua having a joint oversight role. Together local authorities alongside mana whenua will form a representative group that will set expectations for the entity and select an independent panel to appoint the entity board.

The structure of entities and their establishing legislation will protect against future privatisation with assets remaining in the ownership of their local communities. The Government will also implement a strict regulatory environment that will drive the economic and quality performance of the entities and include strong community input into these services.

What protections will there be against future privatisation of the entities?

Continued public ownership of three waters water services and infrastructure is a bottom line for the Government. It is developing safeguards against future privatisation, making it more difficult to privatise than under the current arrangements.

These include legislation specifying that local authorities that constitute each water entity would be the owners of the entity and that any serious future privatisation proposal be put to a referendum.

The entities will also be established in a way that prevents them from paying dividends or offering other financial reward to their owners, making them unattractive to potential alternative owners.

How will the public retain consumer and community influence in the way their services are delivered?

In addition to a representative group which will act on behalf of communities, each entity will be required to engage with communities in a meaningful and effective manner on key documents. The entities will also be required to publish these, and to report on how consumer and community feedback was incorporated into decision-making and set up a forum to assist with effective and meaningful engagement.